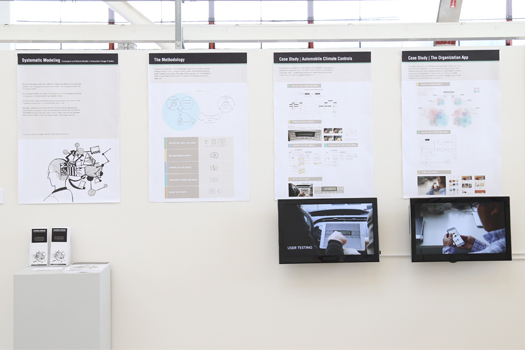 My thesis develops systematic methods in interaction design using three case studies. I am focusing on two systematic models: the conceptual model and the mental model.

A conceptual model is a model that is given to the user through the interface of the product. It is the model in the designer’s mind.

A mental model is a model that a user develops in his or her mind from the interface of the product. It is a model in the user’s mind.

When I was working as an interaction designer in Huawei, I spent a lot of time on drawing wireframes and rarely thought about the logic behind them. I felt it is not the right way to design the interfaces especially when I was designing the whole interaction system of the Telematics (an automobile software system). Some functions overlapped with other functions, and some functions had multiple accesses. Sometimes I felt confused by some of the complex functions. How can users use the product if the designer doesn’t have a clear map in mind?

When Hugh Dubberly introduced the conceptual model, I felt excited about it. I think it, or something close to it is the missing bridge between research and design.

Hugh Dubberly is the master of systematic thinking in the design world. He introduced the conceptual model to me in a system’s course. He has a new way of representing the conceptual model by using the concept map method (introduced by Joseph D. Novak and D.Bob Gowin in the book Learning How to Learn). He is the co-founder of Dubberly Design Office. At Apple Computer in the late 80s and early 90s, he managed cross-functional design teams and later managed creative services for the entire company.

Modeling is a way to convey what is in a user’s mind to other team members. It is also the abstraction of interfaces to help designers understand the logic and concepts behind the interfaces. Models can help designers focus on the functionality needed by the user in carrying out all the tasks from the task domain.

The ideas of the conceptual model and the mental model are not totally new, and the terms of these two models have been defined differently by several different people. These “giants” influenced my thoughts. 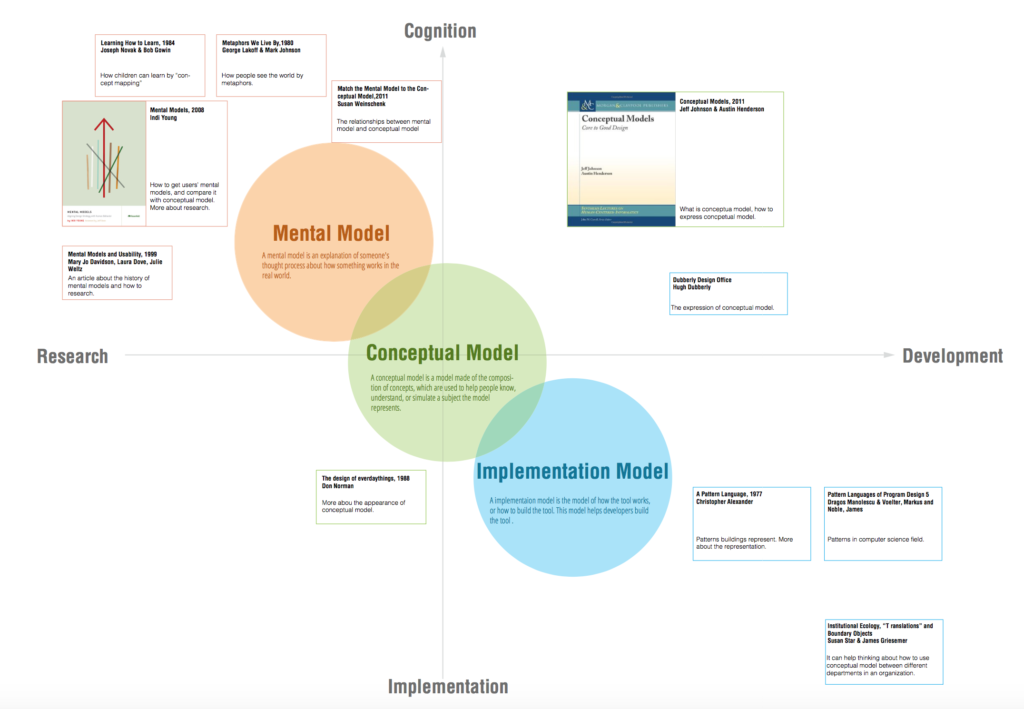 What are my interventions?

Right now, each of the conceptual and mental model theories stands quite alone. One is from the product’s side, the other is from user’s side, but how can we combine them together?

Thus, my interventions hope to shed light on these three questions:

1. How can we designers find the right way and the most efficient way to find out what is in a user’s mind?

2. How can we represent these models?

3. How can we use these models in the design process?

I explored my thesis by these three case-study projects. At the same time, I explored and developed the methodology.

What are the Models?

There are three kinds of models in my theory of systematic modeling – a mental model, a conceptual model, and an implementation model. 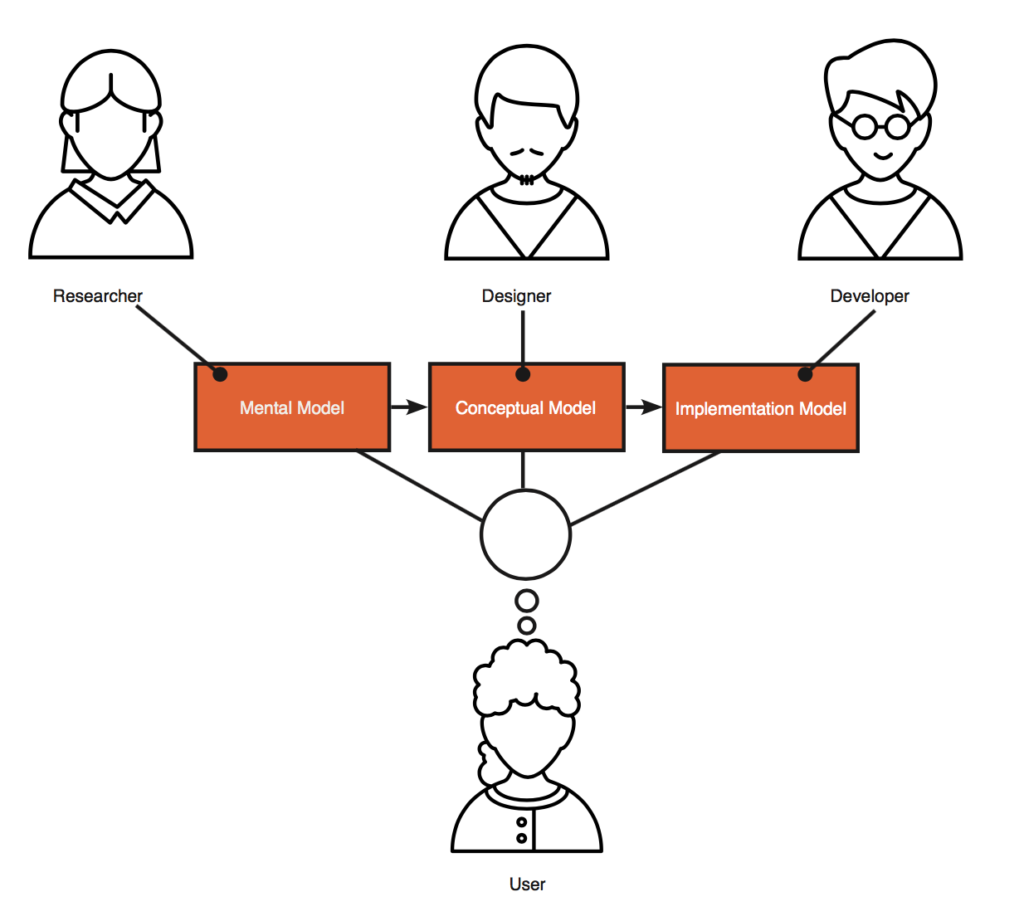 A conceptual model is a model with which users interact. Ideally, it is the designer’s assumption of the user’s mental model.

Here is Susan Weischenk’s definition: “A conceptual model is an actual model that is given to the user through the interface of the product.”

The diagram below is from Tim Sheiner and Hugh Dubberly. Users have goals or tasks in mind when they are using an app. An app has input and output, and users input data and see the output. The input and output connect with each other by logic, and there is also a storage below the logic. In Tim Sheiner’s perspective, the user’s conceptual model contains Object Model (the elements and their relationships), and Data Model (how to manage different states). After all, there is the designer’s assumption of all the things described above, and he called it designer’s conceptual model. 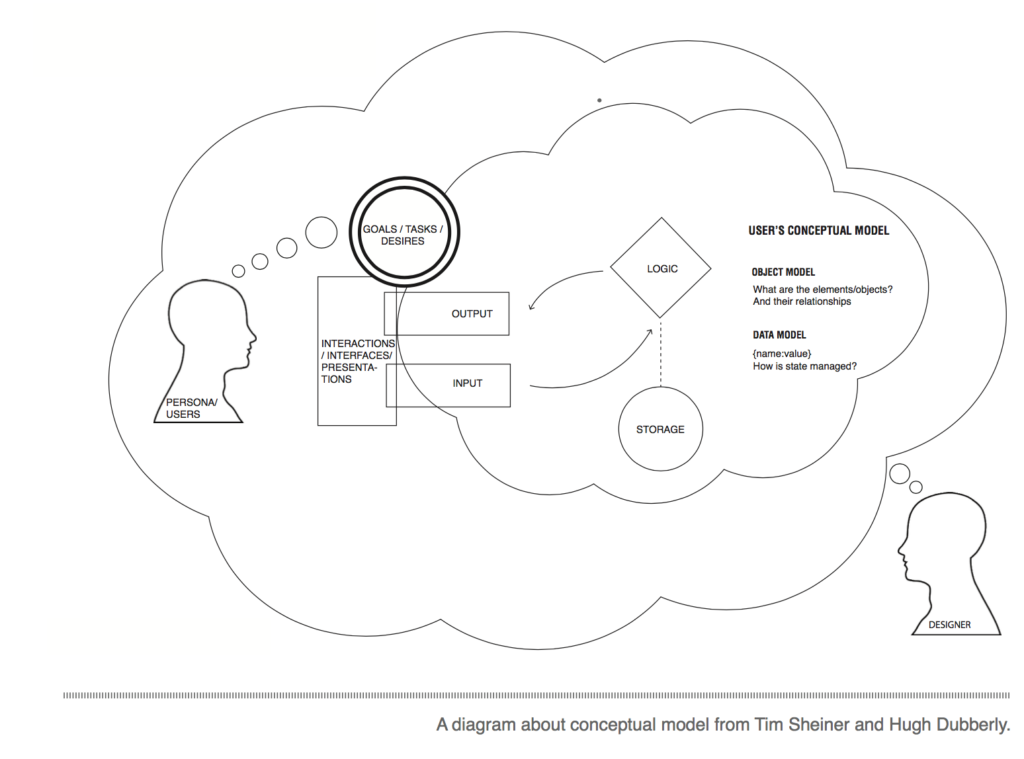 Let’s think about a simple digital alarm clock on your phone. When a designer is designing an alarm clock, he intentionally or unintentionally creates concepts for users – “current time,” “alarm time,” etc.

A mental is a model in a user’s mind. The model develops when people interact with the world. Here is the definition from Susan Carey’s 1986 journal article, “Cognitive science and science education”:

A mental model represents a person’s thought process for how something works (i.e., a person’s understanding of the surrounding world). Mental models are based on incomplete facts, past experiences, and even intuitive perceptions. They help shape actions and behavior, influence what people pay attention to in complicated situations and define how people approach and solve problems.

Jeff Johnson and Austin Henderson said “To use an application, a user have some understanding of it. Such an understanding is called a ‘mental model’ because it is in the user’s mind… … Therefore, mental models are personal, partial, uncertain and dynamic.”

Mental models are what we can get from user research – interviews, observations, user testing, etc. 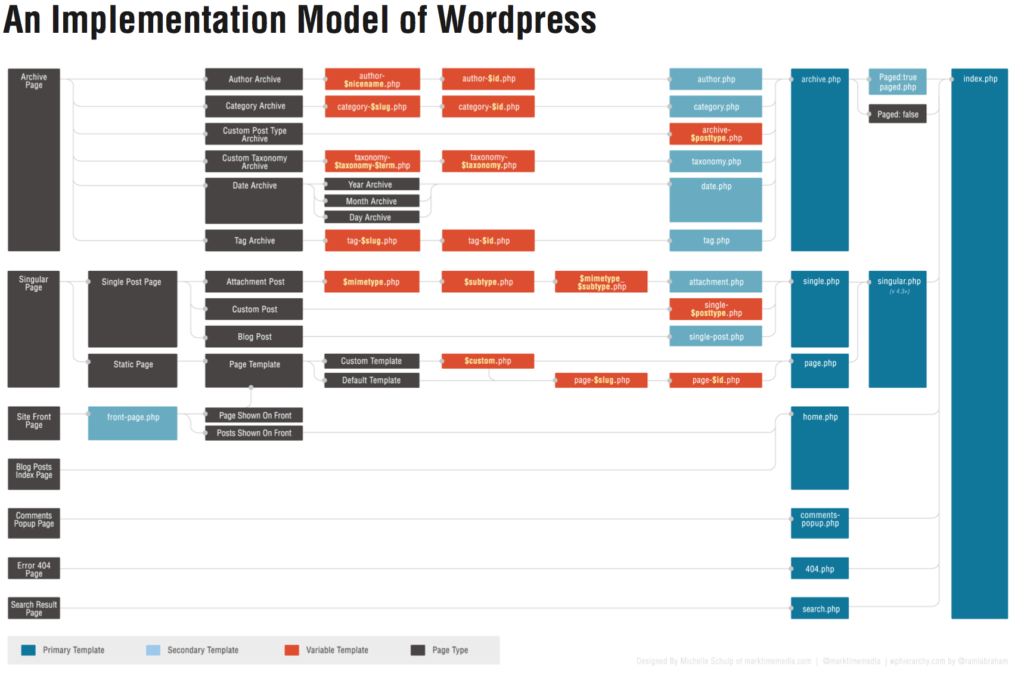 Differences and relationships between the mental model and the conceptual model

One of the most important jobs for designers is to find the mismatches between the user’s mental model and the designer’s conceptual model. 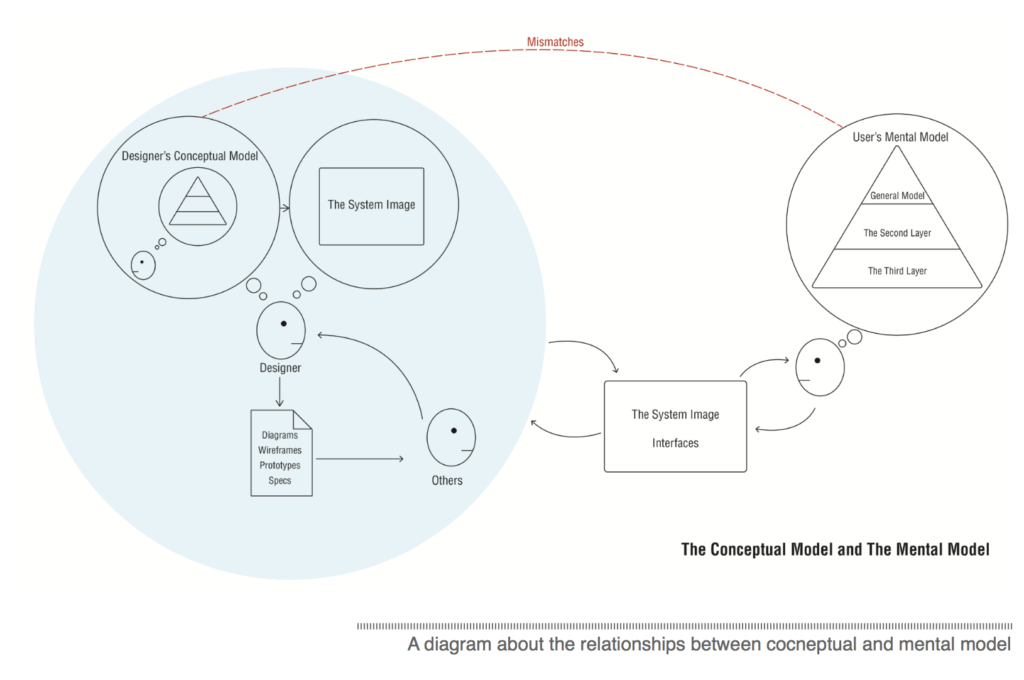 How to Use the Models?

How to use the models in the interaction design process?

Although this topic is not completed developed, there are still some ways to utilize these methods in the design process. This may not be a perfect methodology yet, but I want to introduce some of my conclusions. 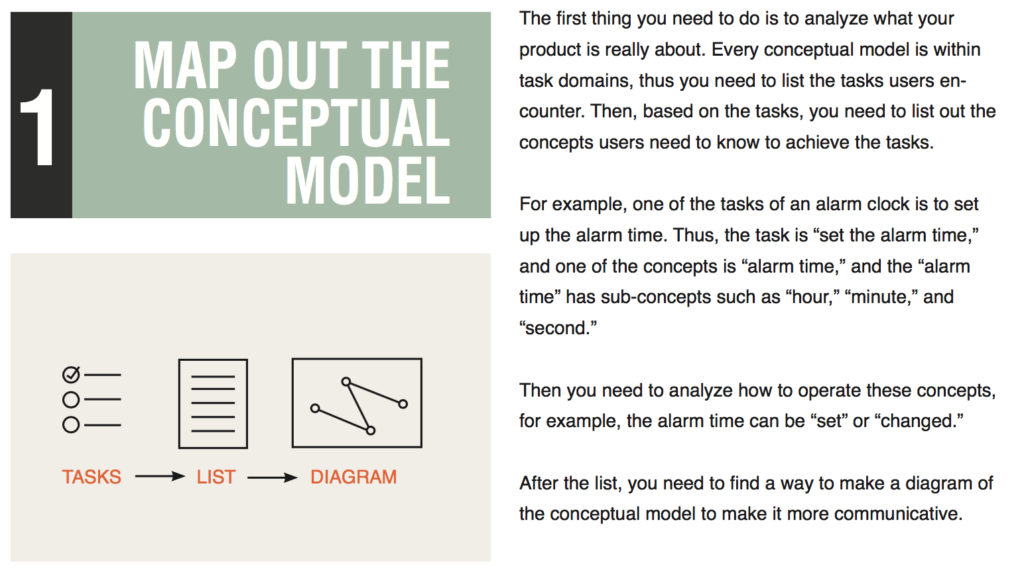 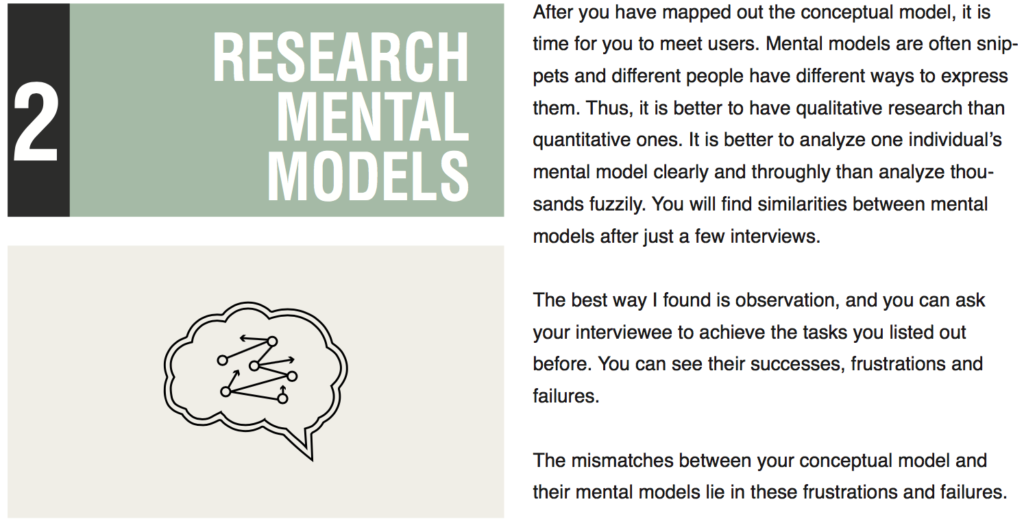 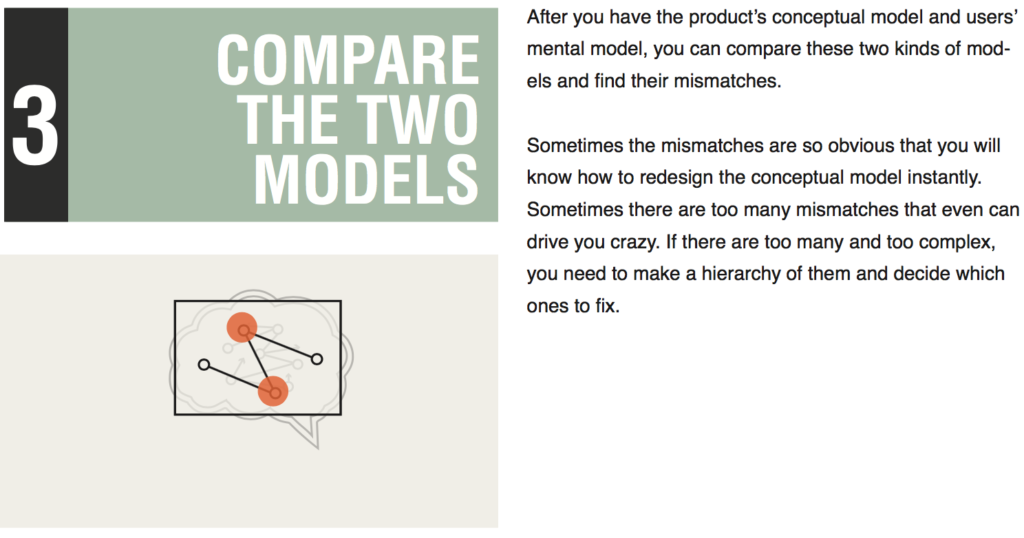 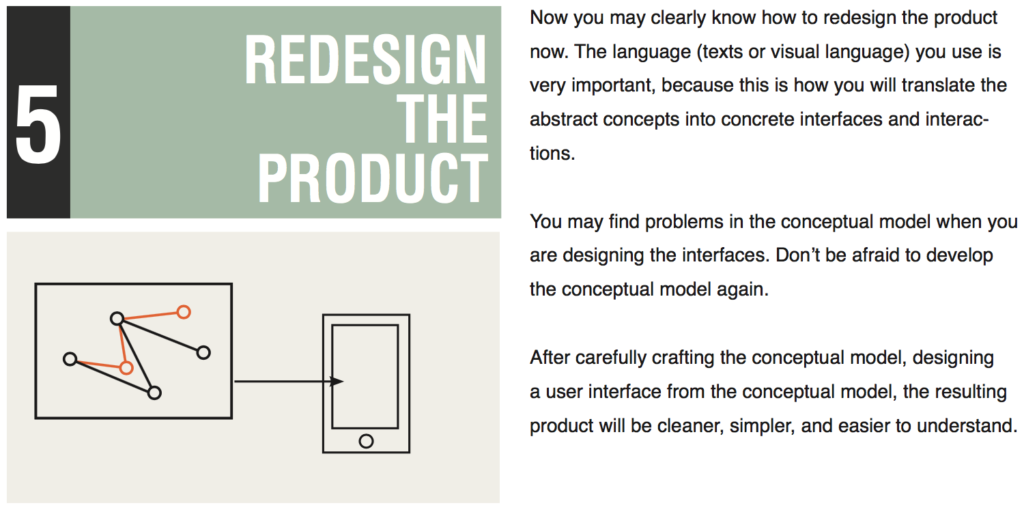 However, there are still questions that need further interventions: Is there a universal visual language of the conceptual model that can be used in all kinds of products? What is the best way to translate models into representations? How do we connect the conceptual model with the implementation model?

I hope to work on this topic in my further explorations. I’d love to discuss it with anyone who is also interested.

Email me if you are interested in this topic: lindaliangying@163.com 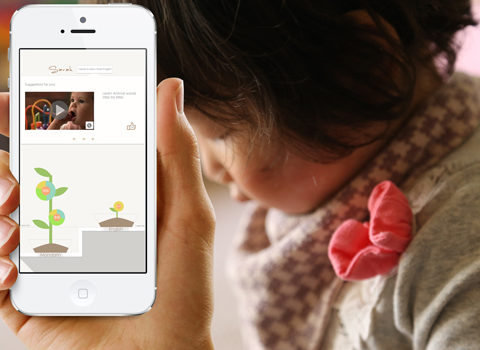