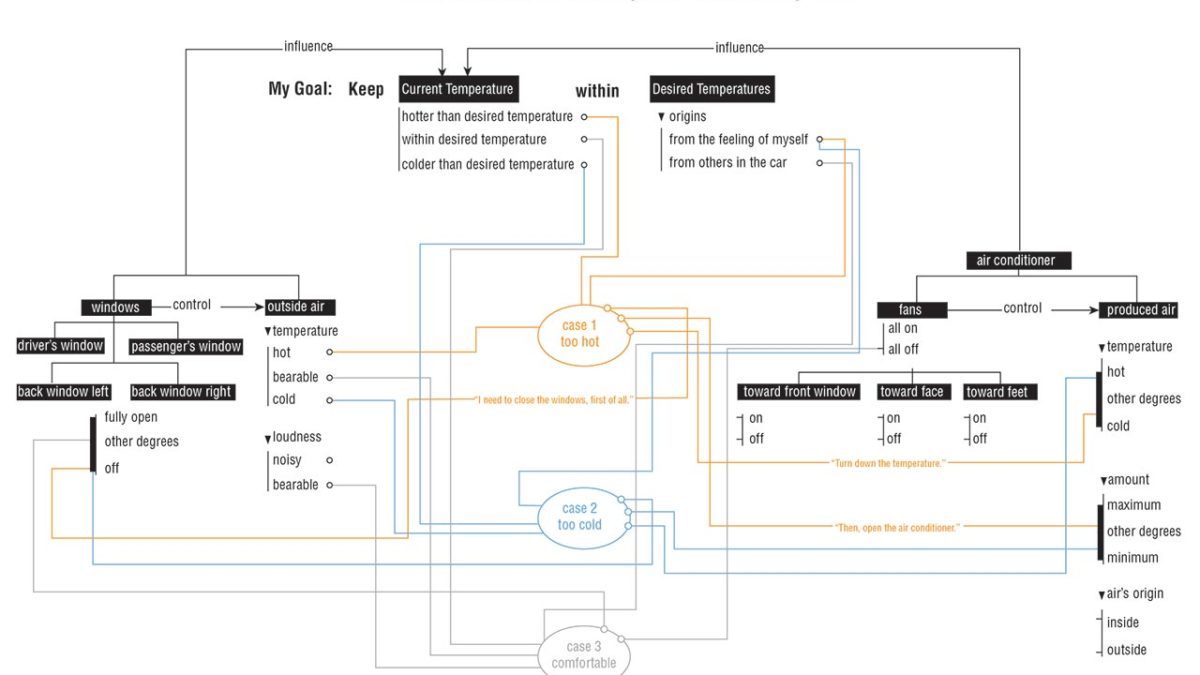 After I interviewed three people on their mental model of the air conditioner in their cars , I found that what I was confused and struggled about was what needs to be represented in the mental models. Thus, I decided to do a self exploration.

This is the air conditioner in my car: 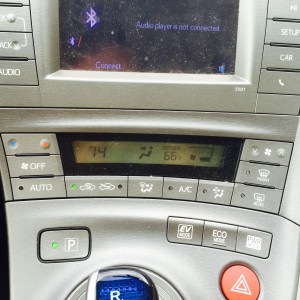 To get the mental model in my mind, I asked myself two questions: the first is what is included in the air conditioner in my car; the second is how you keep the temperature in a comfortable zone?

These two approaches end up with two totally different findings:

The first one: what is included in the air conditioner in my car? 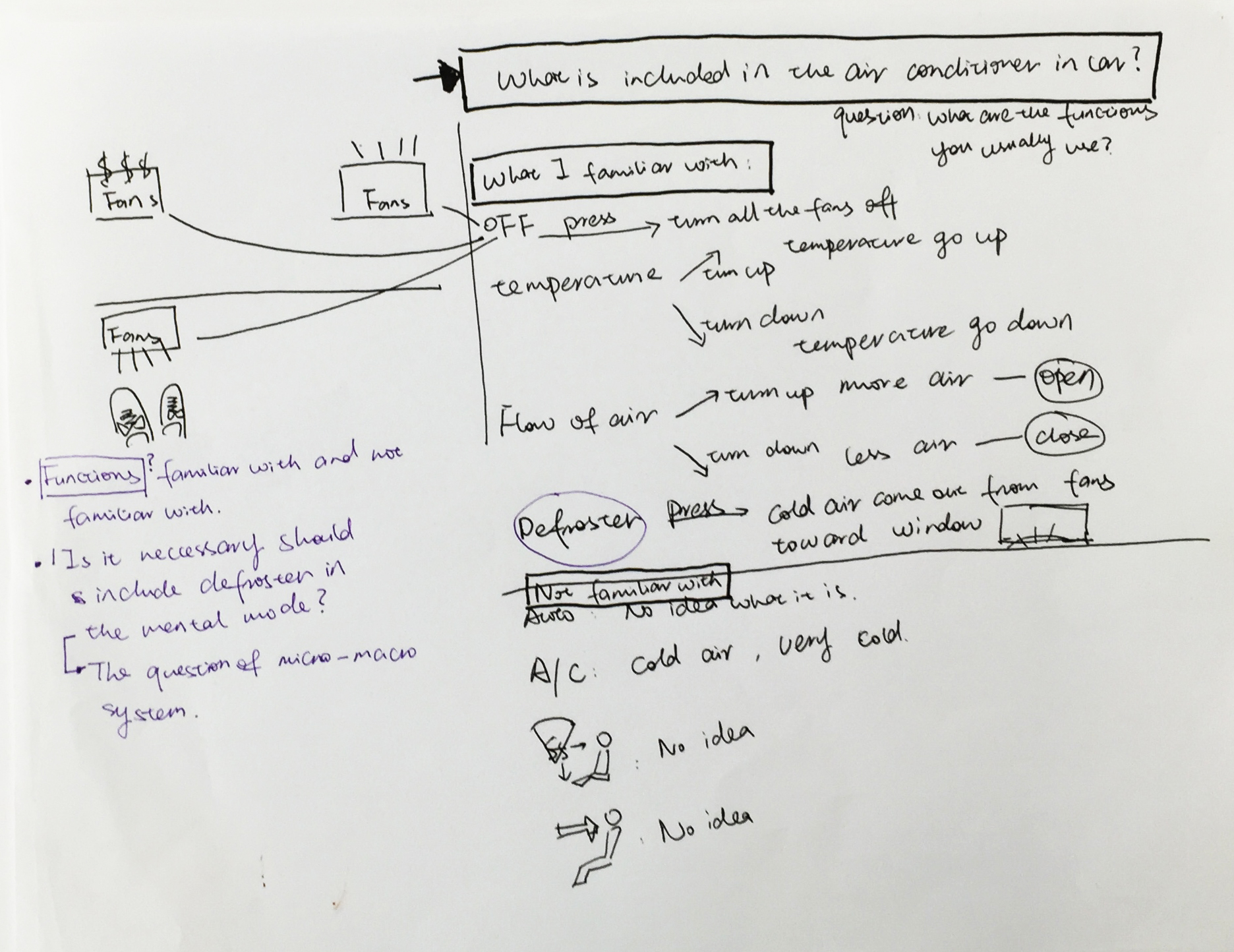 This is more about the air conditioner itself, more about what the product looks like. There are mainly two categories: what I am familiar with and what I am not familiar with. However, after I did the drawing, I found this is the not mental model, or not what I want.

Thus, I asked myself another question: How do you keep the temperature in a comfortable zone? 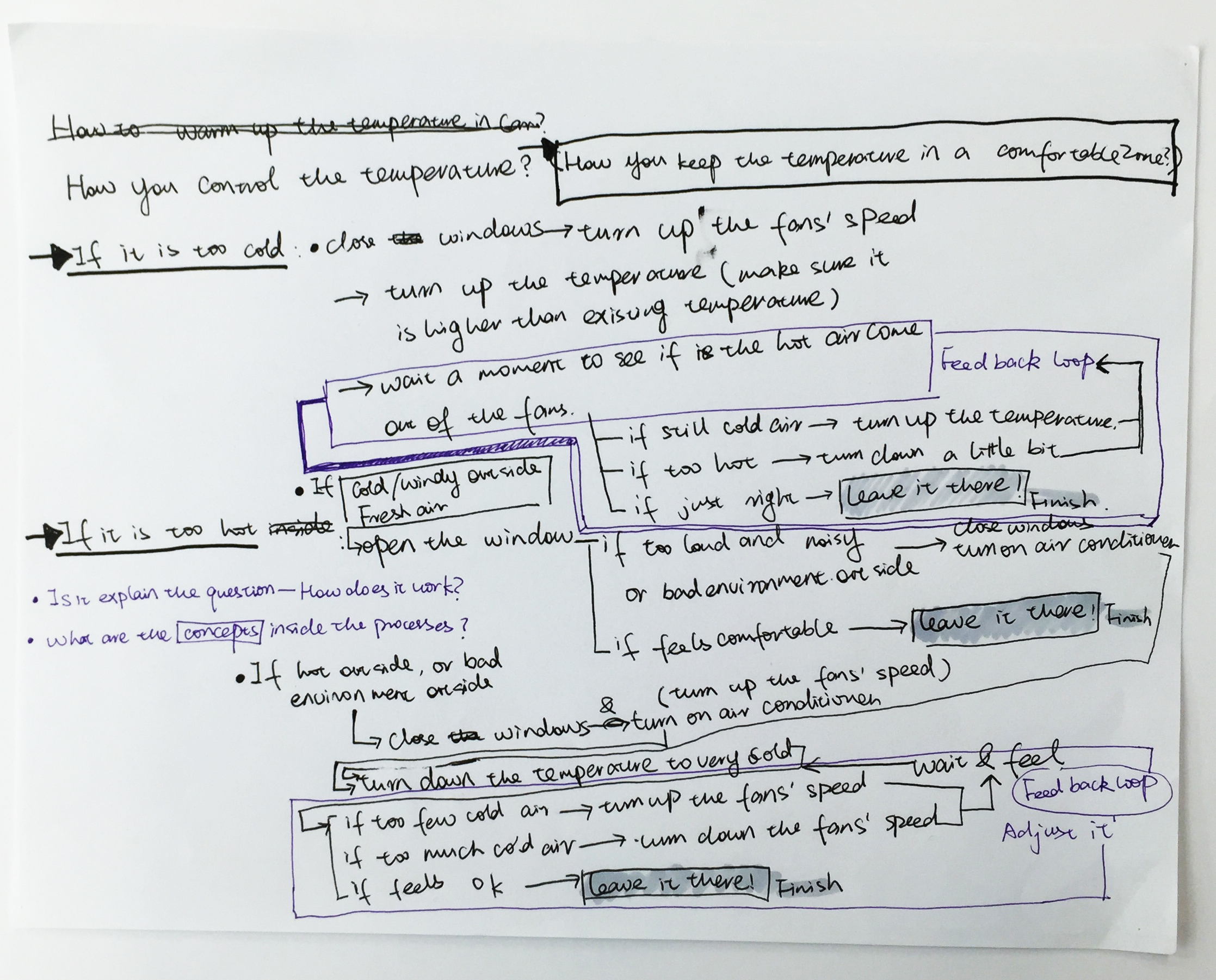 Conditions and feedback loops appear on the paper.

However, another question appears: doesn’t it look like a flow chart? or task flows?

It’s important to note that the conceptual model is independent of task flow and presentation.      —-Hugh Dubberly

Then I came back to Hugh’s diagrams, such as:

Is there a way to express the entailment(see more here) and the logics and flows within it? 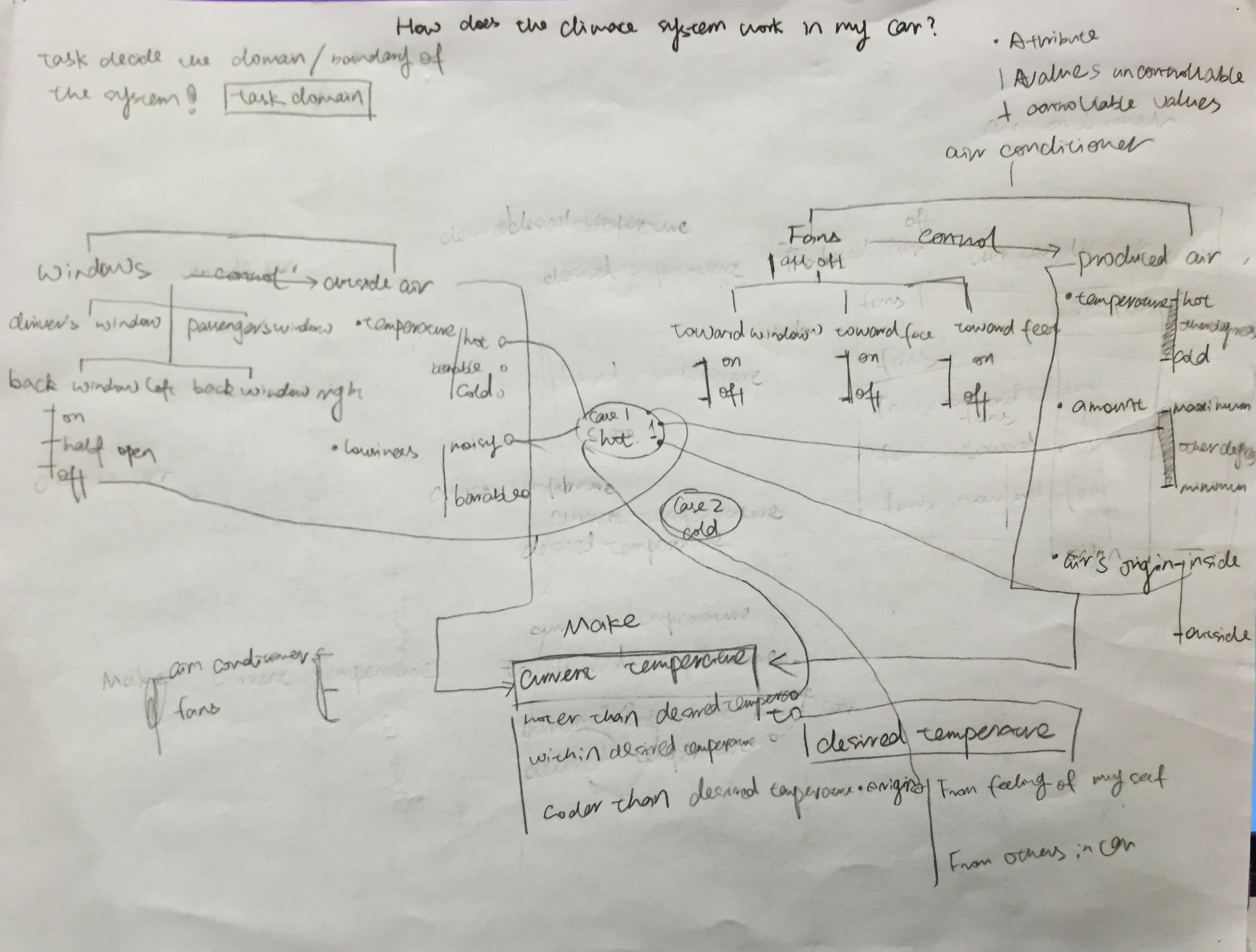 There are mainly two layers in this diagram: concepts (attributes, values, and concepts’ relationships), and use cases ( conditions and operations).

And then here is my diagram: 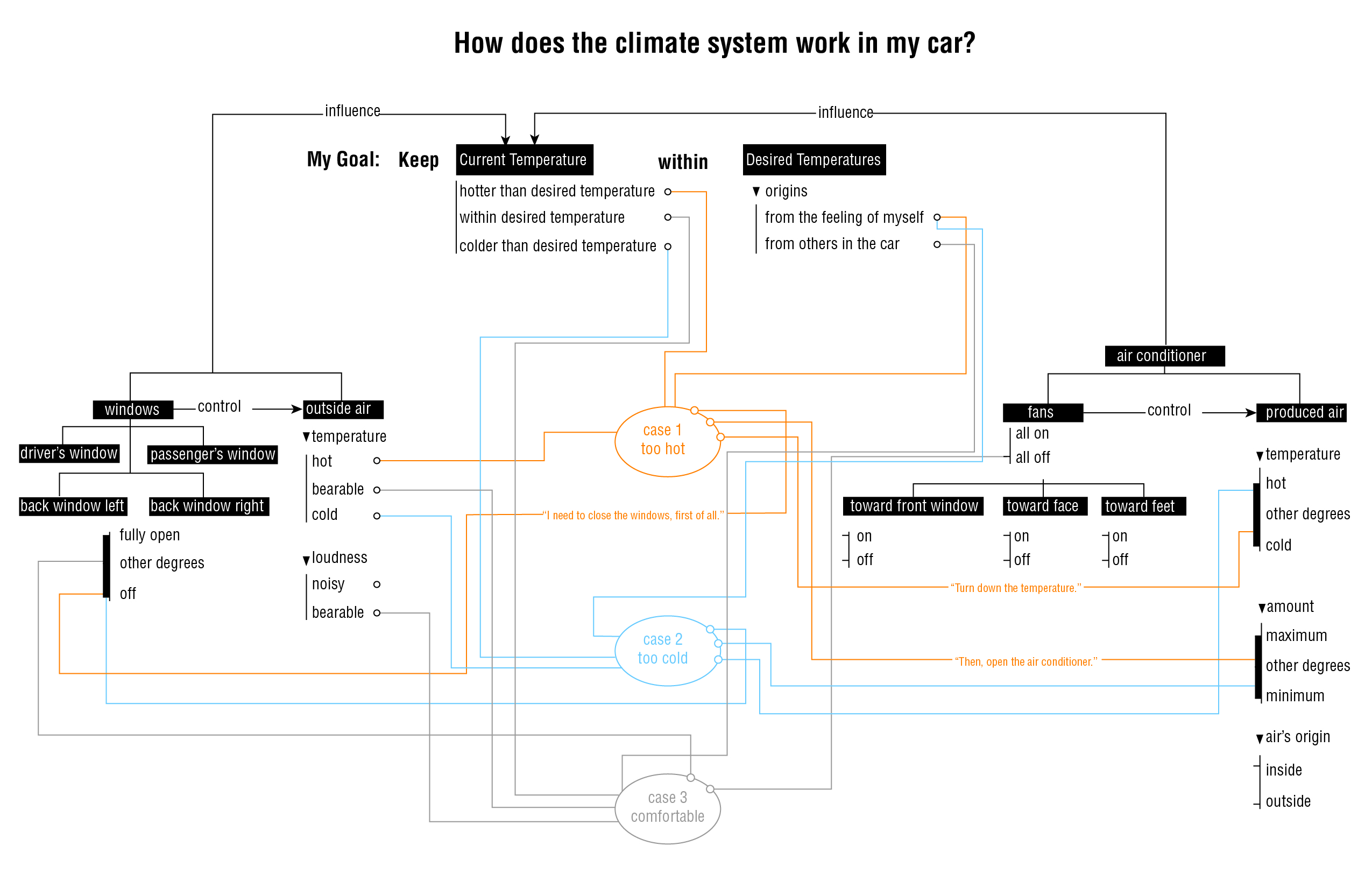 I am also playing with the semiotics, inspired by the schematics in the hardware electronics world: the black blocks are objects, the triangle indicates attributes and the line on the left indicates values of the attributes. There are task temperature and desired temperature in the goal description. Outside air and air from the air conditioner influence the current temperature. Windows and fans control outside air and produced air. Moreover there are three main “use cases” in the diagram. For example,  if the current temperature is hotter than the desired temperature and outside air is too hot, than I will turn off the windows, turn up the fans’ speed (which is meant to turn on the air conditioner), and adjust the temperature.

Here is some feedback from Hugh:

The diagram is actually pretty clear to me — because I already have a sense of what you’re trying to do. However, the diagram could be clearer — if you organized the diagram to highlight that the air conditioner is a self-regulating system — that it is organized around a feedback loop.
At heart, a car air conditioner is special case of air conditioners, and air conditioners are a special case of a self-regulating feedback system.
All feedback situations have the following elements:
– an environment (in this case the car interior)
– a system that interacts with the environment (in this case the air conditioner system)
– a significant variable that the system tries to maintain in relation to the environment
(in this case the temperature inside the car)
– disturbances (in this case sunlight heating the car interior)
All self-regulating systems have the following elements
– a set point (the desired temperature, say 68 degrees F.)
– an actuator (the compressor + fan)
– a sensor (whatever measures the temperature)
– a comparator (a device for deciding if the temp is high or low, often combined with the sensor in air conditioners)
The feedback loop is the information flow from actuator to environment (air temp) to sensor to comparator and back to actuator.
If you want to get technical, the actuator and sensor also have
– range (the extent of their operation, e.g., from -20 to 120 degrees)
– resolution (how finely they operate)
– frequency (how often they operate)
So: The basic loop is key.
Beyond that, you have a user (a driver or passenger) who sets the set point, based on a goal (being cooler) and based on a mental model of what the air conditioner will do.
As you noted, the user has a number of options for achieving the goal of comfort (a higher level goal than an air temp of 68 degrees):
– Open the window
– Open the vents
– Turn on the fan
– Turn on the air conditioner
– Remove a layer of clothing
– Drink a cold beverage
– Etc
Each option has its own feedback loop. However, the window is not a self-regulating device. That is, the driver decides when to lower and raise the window — the driver closes the feedback loop.
The options come with trade-offs. Opening the window may increase noise and let in fumes. Running the air conditioner may  increase fuel consumption. Choice of options happens at a higher level as the user balances goals of comfort and economy etc.
Working out a diagram of the drivers goals and actions would be super interesting.
I agree with the idea that you would learn from interviewing users. I’m not sure 20 is a magic number though. However, before you do any interviews, you MUST have a “hunt statement” — a clear idea of what you want to learn from the interviews. You also need a clear protocol (set of questions) for getting at the answers you need. Just asking people how they think about car air conditioners will NOT be very useful.
Asking people to tell you a story about how they figured out how to use their car air conditioner might be more useful. Even more useful might be putting people in your car and asking them to tell you what they are thinking as they figure out how to use your air conditioner.
I hope that helps.
– Hugh
###
Dubberly Design Office

After the self exploration, I want to explore what are others’ mental models and what are the differences between different people’s mental models. 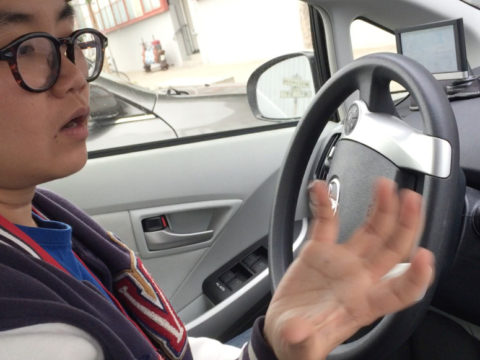